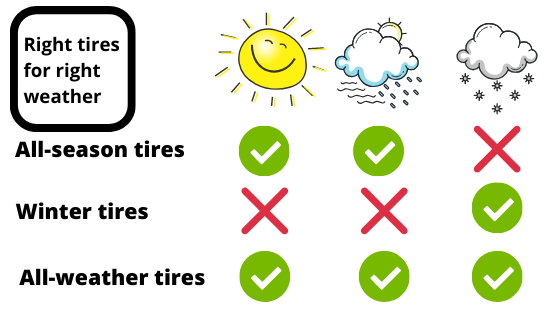 So, what happens if you put larger than recommended tires on your car or SUV? Larger tires decrease fuel efficiency, this is because of the simple reason that larger tires are heavier than smaller tires because they have higher rolling resistance. It takes more force to move the larger tire from its resting position. Also, the wider the tires the higher the rolling resistance is so the engine has to work harder to move the tire.

It is therefore very important to stick to the manufacturer’s recommended tire dimensions when buying new tires for your car especially if you have a hybrid or electric car. If the recommendation is for the dimensions 265/70R17 and you are in the market for all-season tires, then you need to buy 265/70R17 all-season tires. This assures that you have tires that are the most adapted for your car and will allow you to benefit from the best fuel efficiency.

If you don’t follow manufacturer’s recommended tire dimensions, then you would be jeopardizing both fuel efficiency and handling of your vehicle. This is because the tire size can affect everything from braking (ABS), handling and your odometer, for instance, a larger tire reduces the car’s effective gear ratio which can in turn negatively affect the transmission and even the braking system. In addition, a wider tire can put your car in danger of hydroplaning. With electric and hybrid cars having battery packs that already make them heavier and slower to stop than regular combustion engine cars, the risk of hydroplaning is already increased.